Fodder and the Excess of Creative Thought

Fodder and the Excess of Creative Thought

Staring a clean, white, new canvas, especially a particularly large one, is intimidating.  Where to begin?

One of my favorite ways to begin is to take an incomplete painting or old painting that never quite made the cut and rebuild it.  Sometimes I just make a canvas very busy with colours and shapes and leave it to be worked on later.  When working in acrylics, I would use a light colour and cover the entire busy surface.  Once it is sticky to touch, I then spray it with water, letting the droplets sit for a moment before buffing the surface with a rag.  If painting in oils, I usually cover the entire surface with Paynes Grey. I let the oils sit a bit longer before I buff with a rag that I have rolled into a barren.

With varying rubbing pressure, shapes and colours are revealed but the surface colour I have just used makes these revealed forms more cohesive.  It’s as though I can see all the shapes inside a gauzy bag that holds everything together as one.

The most important part of my process is writing.  This is how I attempt to clarify my thoughts so that I can get painting and REALLY sink my teeth into the work.  I generally would write about what I see in the canvas.  What does it remind me of?  How do the images and colours relate to my thought pattern?  And why am I using such monotone colours?  What is going on in here?

When creating ‘Fodder’ I began the work by painting over an unfinished oil painting.  As I built up the layers, my colours were neutral and the paint was thick.  Using gobs of Dorland wax mixed with the paint, I buttered on the paste with a palette knife and scratched other areas out with a skewer stick and serrated knife.  The wax substance gives a delicious sculptural and matte quality to the paint.

Shapes of buildings began to appear along with a pathway. Still unsure of my connection to the work, I stepped back and began to write. I had no real connection to the painting so why did these images begin to appear?As I wrote and discarded ideas, I gained some clarity.

The neutral coloured imagery in the painting reminded me of a train station. I remember sitting on a train in Germany unsure of being on the correct train. I looked down the tracks and I felt like I was on the game show ‘Let’s Make a Deal’.  Do I choose door#1?  Door #2 or door #3?  But I decided to just stay put and see where the train went. 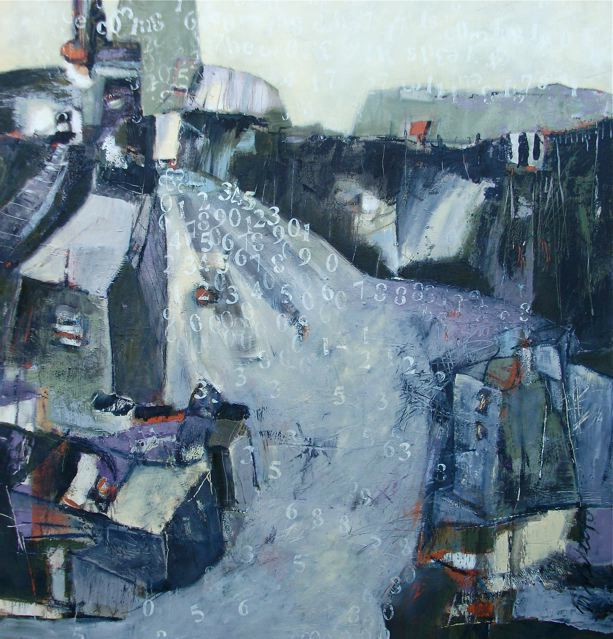 Painting is very much about choices and trusting your gut.

As I continued on my painting I realized this work was exactly about those choices and the creative process itself.

The numbers that are stamped on the painting seeming to march down the pathway represent the many ideas I have during the creation of the work.  As I continue to paint and write, the clarity gained allows me to see more clearly where I am going in the picture.  Some ideas make it through the portal, some do not.
The ideas that do not make it become fodder.  They are the excess of the process, significant along the growth and focus of the work but no longer needed.  But in the end, the ideas that make it through the gate are the ideas that I trusted would get me to the successful end result.

Incidentally, I was indeed on the correct train in that station in Germany after all.